On the road this weekend

Had a nightmare last night that Americans started eating healthily, and finding good restaurant grease became almost impossible. Thank goodness it was only a dream. Look for new postings on Tuesday.
Posted by by Greg Melville at 5:59 AM

The NY Times has an interesting article today on how the country's electrical grid is sometimes unequipped to handle the power coming from wind farms--and the problem will only get worse as we start building even more turbines. Congress believes fixing the grid to handle renewable energy is almost prohibitive, at $60 billion. (Of course, that's the cost of a mere six months in Iraq.)
Posted by by Greg Melville at 6:29 AM

Become a member of the Greasy Rider group on Facebook.
Posted by by Greg Melville at 6:28 AM

Renewable energy is only a fad...just like the internet.

Good thing we've got so many people in the US exposing that whole "renewable energy" thing as the fad that it is. Investing in it, or providing huge tax breaks for it, is like throwing cash into a black hole. Let the Canadians and Europeans keep cornering the renewables market, see if we care. The fundamentals of our economy are strong! We don't need, for instance, the thousands of skilled jobs that will be created by this new $1.2 billion solar plant in Quebec, to be built by a Norwegian energy company.

In Greasy Rider, I quote Bill Clinton saying that if we set our minds to leading the world in renewable energy techology, the US could undergo the greatest economic expansion since World War II. Not that he knows anything about economic expansion. Do you sense any sarcasm here?
Posted by by Greg Melville at 7:13 AM

Here's a fascinating video on CNN about a guy who drives a grease-powered car. Hey wait, that guy looks an awful lot like me!

Posted by by Greg Melville at 7:03 AM 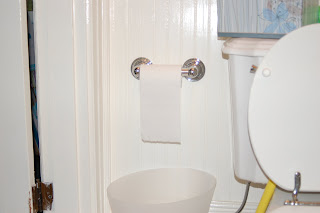 Almost entirely at the prodding of Dr. Wife, MD, we've taken many measures around our house to reduce our environmental impact. We buy mostly local organic produce and meats. We compost to reduce waste. We use only non-toxic, all-natural cleaning products and soaps. Of course, we drive a grease-powered car. And we also use toilet tissue that comes from 100-percent recycled paper--to reduce the need to chop down trees. "So," you might ask, "is it cottony soft?" Let's just say that I sit kind of funny, now--but it's my small sacrifice for a better planet.
I do admit that sometimes I linger on the toilet, wondering if I'm nearly alone in taking the cause to this extreme, or if Al Gore's butt is chapped, too.
Posted by by Greg Melville at 6:39 AM

Is that sap on your shirt from hugging trees? 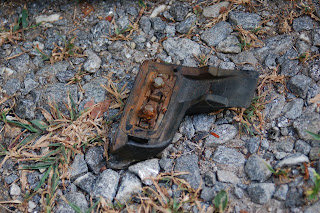 My old Mercedes wagon has been around the block a couple hundred thousand times--and even driven coast to coast on veggie oil, not stopping at a single gas tank--so as you might expect, random pieces of it ocassionally fall off. This is the latest to appear on my driveway. Anyone have a clue what it is and what it does? Any insight would be helpful.
Posted by by Greg Melville at 6:13 AM

So let me get this straight, the city of Portsmouth NH, has discovered that by encouraging people to recycle their cooking grease at home--instead of flushing it down the drain--plumbing problems are reduced (saving homeowners money), wastewater treatment issues decrease (saving the city money), and a local company (creating American jobs) turns the stuff into cheap home heating oil and fuel (saving homeowners money, again). Oh, and it lowers the city's carbon footprint and dependence on foreign fossil fuels. Yes, this environmentally friendly stuff really is going to drag us down financially.
Posted by by Greg Melville at 6:32 PM

What are you doing about it?

An article from CNN.com today: "The head of the Intergovernmental Panel on Climate Change has described as "tragic" the lack of action on climate change by developed countries."

The greatest myth about global warming is that so-called "green" practices are too expensive and burdensome to our economy. On the contrary. Talk to the folks at the Fort Knox Army base in Kentucky about that one and they'll laugh (as they save 60 percent on their fuel and electricity costs from a decade ago through green practices). Oh yeah, I did talk to them. It's in the book.

Use your vote this fall to bring about change.
Posted by by Greg Melville at 6:05 AM

Rust spot of the week 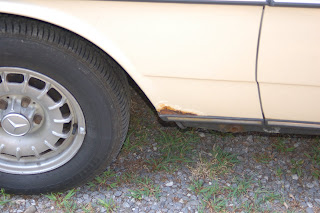 This rust spot is on the front left quarter panel of my 1985 Mercedes 300TD that's powered by used fryer grease. I've got about enough rust spots to fill at least a year's worth of "spot of the week" photos. Coming soon: "Name this car part." I'm going to photo, and ask you to identify, different pieces of the car that randomly drop onto my driveway.
Posted by by Greg Melville at 1:04 PM

It has come to my attention that there's a whole "Green" Land in Europe. I heard two people talking about it at a restaurant, and one of them said it's very chill, I think. Looks like the Wisconsin cheese eaters and their piddly "Green" Bay have some catching up to do.
Posted by by Greg Melville at 7:53 PM

Things that make it go vrooom. Part I. 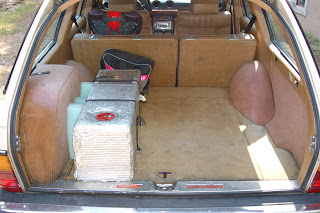 I was making Freedom Toast for the kids this morning, when I realized that I haven't done much explaining on this here blog on how my car runs on waste vegetable oil (fry grease). So let me start by showing a picture of the interior. That suspicious looking silver thing is the veggie oil tank, which holds 15 gallons of wholesome, saturated fattyness. (I'll describe it in greater detail later.)
One piece of advice: If you've got one of these things strapped inside the back of your wagon, don't cross the border into Canada. Because on the way back into the US, Homeland Security will have a question, or 20, about it. It happened to me in Michigan one very long day. (Though I'll give them credit for doing their jobs.)
Posted by by Greg Melville at 7:40 PM

Dick Cheney's advisor on global warming (a man who I'm sure is very concerned with the plight of the polar bears) has been promoted to basically shaping the federal government's policy on global warming and clean air. Uh oh. I make the point in Greasy Rider that we spend more money on one Tomahawk Cruise missile than we do on the Energy Department's entire annual budget for renewable energy and fuel research. Doesn't look like that's gonna change.

So who is this guy? He's not a scientist, but he did volunteer during the Florida recount eight years ago (no word on whether he stayed at a Holiday Inn Express). His name: Frank Chase Hutto III. Something tells me he didn't grow up in Harlem, dodging crack dealers and gangs so he could get an education and work his way to a powerful job as one of Cheney's minions.
Posted by by Greg Melville at 7:34 PM

Why did I post this? Because it's still funny.

Much has been made of the Pickens Plan. He met yesterday for 90 minutes with John McCain in Aspen, and then later with Harry Reid to peddle his concept for generating 20 percent of America's electricity by wind in the next 10 years. I don't deny that Pickens, the Swiftboat financier, sits close to Dick Cheney on the list of the country's Most Evil Oil Men. And that there must be some sort of Insidious Plot behind his "plan." But who cares? If it takes Satan himself (herself?) to do show that renewable energy can be profitable, then so be it. Go laugh your way to the bank T. Boone.
Posted by by Greg Melville at 6:07 AM

I've only read the headlines, but apparently, there's a whole "Green" bay in Wisconsin. I'm not sure what makes it green--probably something with cleaning up the water. I'll check it out futher and report back here. The guy heading it--someone named Favre--has moved to New York, it seems. Maybe Manhattan is getting serious about getting rid of pollution in the Hudson. That would be good news.
Posted by by Greg Melville at 11:26 AM 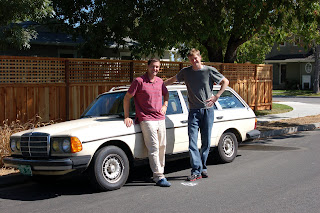 This is my 1985 Mercedes 300 TD Wagon. It runs on waste vegetable oil I get from restaurants. My kids don't like riding in it, because the pleather seats stick to their skin, it smells funny, and the air conditioner stopped working sometime during the Reagan Administration. They don't seem to care that we get our gas for free, or that instead of producing smog from the tailpipe, it produces smug. I will be updating this site as often as possible (which may or may not be very often).
Posted by by Greg Melville at 8:02 AM

by Greg Melville
The book, part cross-country adventure and part investigation into what's already at our disposal to lead sustainable, energy independent lives is available at stores now.

From the book's publisher

Go to the Algonquin web site to find out more.